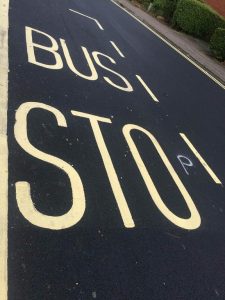 A reddit user has posted a picture of a bus stop in Stevenage, Hertfordshire with a serious mistake: the letter “P” is missing from the second word, resulting in it saying “Bus Sto”.

It appears that the sign writer probably miscalculated the lettering size and ran out of space, deciding to leave it as it was rather than redo the whole thing. It then looks like a member of the public decided to correct the error and added a smaller “P” in white paint within the remaining space.

The error drew a number of comments from other reddit users. Some Stevenage locals even expressed happiness that their town was finally getting publicity for something, while the original poster wrote:

“‘My town. By god does it amaze me. Because it wouldn’t be Stevenage if it was made properly.”

Others drew comparisons with a well-known brand of gravy with a similar spelling, while one suggested it might be a reference to rapper Busta Rhymes.

The case highlights the importance of getting the size right for your personalised custom lettering. At Lettering Direct, our easy designer allows you to select from a range of sizes. Once you’ve measured the space you want to decorate, you can simply pick the largest size that fits within your desired dimensions and continue with your design. When you then apply it later, you can be sure you won’t be short on space.

Why not try our vinyl lettering designer here

The bus stop in question, along with people’s comments about it, can be viewed here.